Jasmine Bell: Piercing through the darkness of HIV stigma | SIDE by SIDE
Skip to content
December 14, 2022

Jasmine Bell: Piercing through the darkness of HIV stigma

Jasmine Bell sitting in a room near a kitchen looking up towards the window.They say life is full of possibilities, and Jasmine Bell is ready to seize any opportunity that comes her way. Navigating young adulthood as a Black woman can be tricky. Still, she puts faith in herself and her ability to perform wonders. So, she let herself dream big. Six years ago, Jasmine was on track to making those dreams come true. But then she got the news.

When Jasmine learned of her diagnosis, it was a dark, challenging experience. She recalls, “It was a soul-crushing, devastating time for me. My mind, my whole world was just shaken up.” She struggled with accepting the reality of the situation, repeatedly asking herself, “Did this really happen? Is this really my reality?” But, unfortunately, it’s not just hers. This is the reality of thousands of people diagnosed every year – 48% of new HIV cases are women. In Marion County, Black women are 5 times more likely to acquire HIV than their white counterparts. 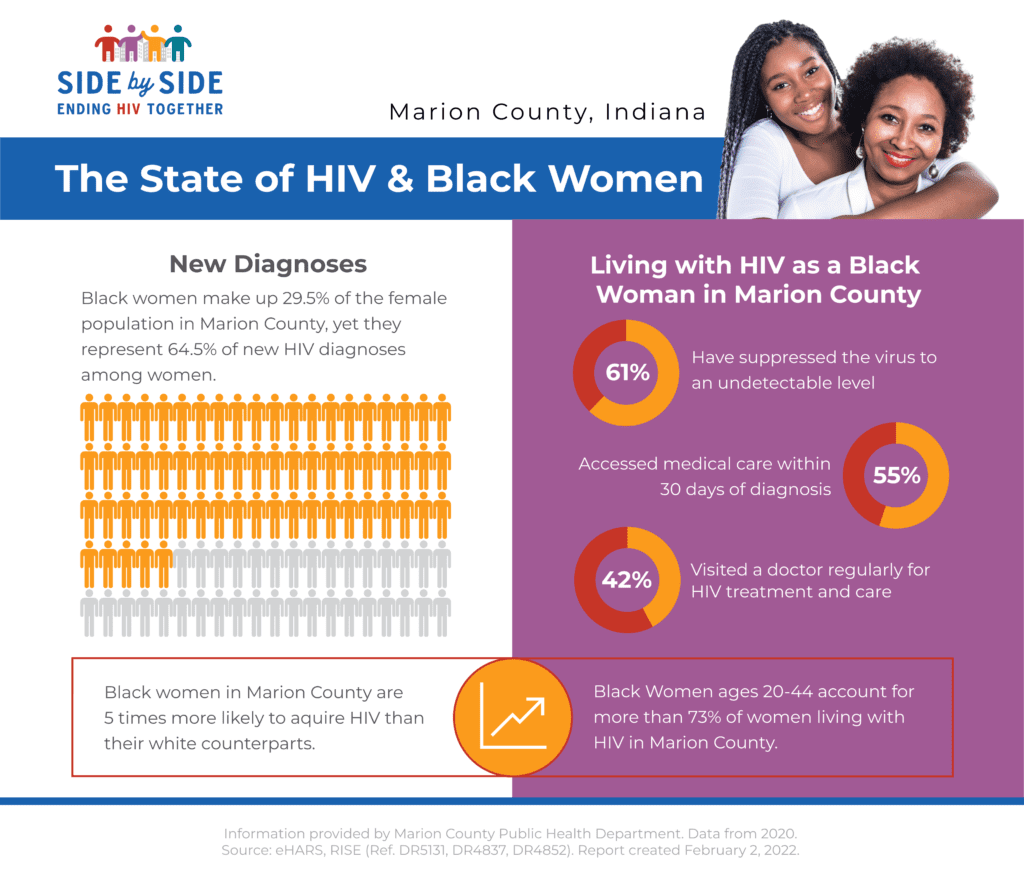 Do these facts sound shocking to you? You are not alone. Lack of knowledge about HIV has festered into a deadly stigma that has been allowed to persist for more than 40 years. When HIV was first discovered in the United States in 1981, doctors and scientists scrambled to understand the rapidly spreading virus. Likewise, regular folks struggled to make sense of the pneumonia-like plague that was suddenly attacking our communities and otherwise healthy individuals. 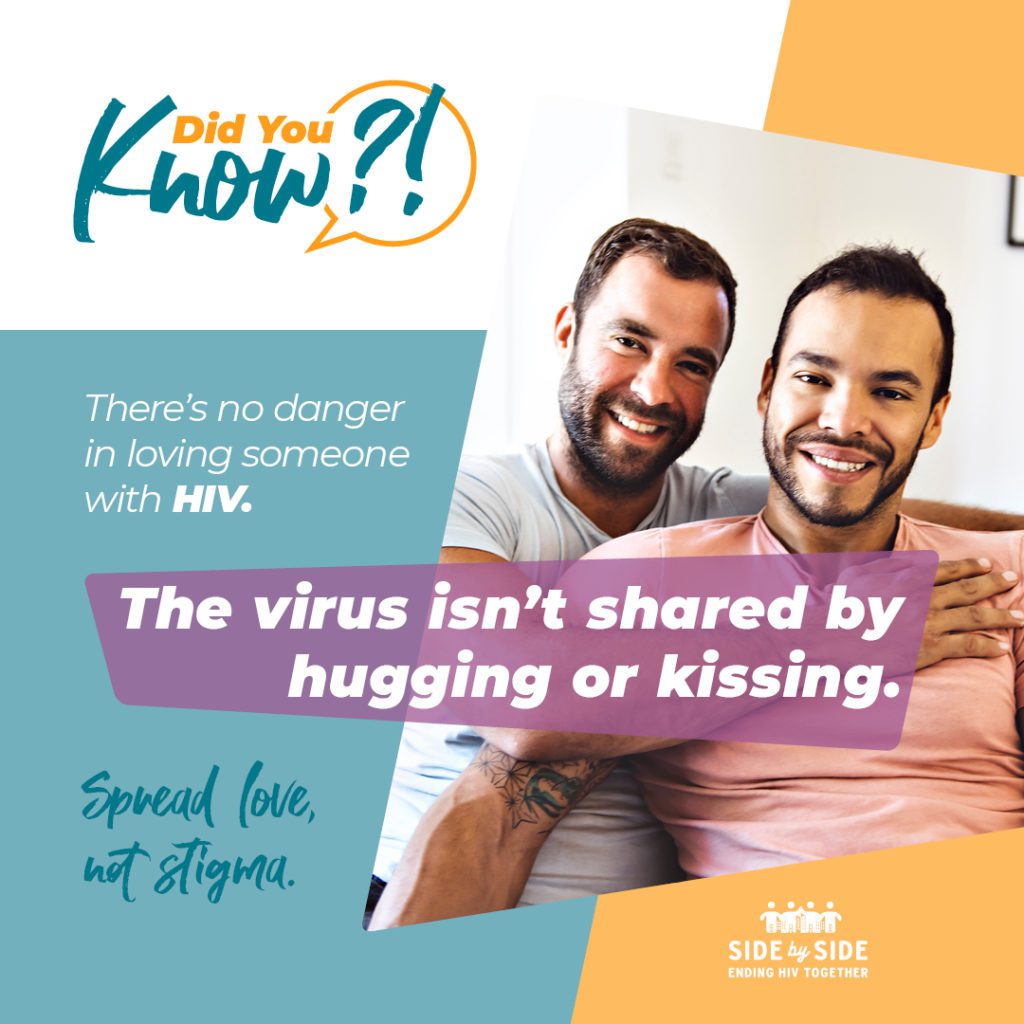 The truth is, ANYONE CAN GET HIV- even YOU. Comments such as “HIV is a gay disease” or “only addicts get HIV” are false. Marion County is in the midst of an active HIV epidemic. The rates of new HIV cases are twice the national average. Hundreds of people in our community are living with HIV and do not know it because they haven’t been tested.

WE SHOULD SPREAD LOVE, NOT STIGMA. Dismantling stigma is one way we can end the HIV epidemic facing Marion County and the United States. To do this, we must start by educating ourselves and others about the realities of HIV. We must also work to create a more inclusive society where everyone can get the information and resources needed to protect themselves. And we must stand up for the rights of people living with HIV so that they can live whole, healthy lives without fear of judgment or discrimination.

SIDE by SIDE IS DEDICATED TO CHANGING THE NARRATIVE AND FIGHTING HIV AND STIGMA AT EVERY TURN. We believe HIV transmissions can become increasingly rare through knowledge, support, and prevention. However, to change minds, we must reach hearts. We are so grateful to have had the opportunity to sit with Jasmine, who has been living with HIV for six years. She generously agreed to share her story and shed some light on how support, access to care, and acceptance changed her life.

For Jasmine, it was as though her life had come to a halt. Suddenly, she couldn’t recognize herself in the mirror. Jasmine realized that she needed to start the long journey of rediscovering herself in the context of living with HIV. “My mom supported me, my grandmother, and my cousins. So I just had a really great support system. And they helped me to remember who I was. And they never let me, I guess, fall to the wayside. They wouldn’t let me beat myself up too much, because, in reality, things happen.”

Eventually, she believed to feel free living with her condition, she had to go public. She knows that coming out as HIV positive to friends and colleagues has its risks. But Jasmine is determined to share her truth and break the stigma. She dismissed any negativity and spoke aloud about things the public usually spoke about in hushed tones.

Like a bird leaving its cage, Jasmine is free. Not only was it liberating, but sharing her experience has allowed her to grow as a person and encouraged her to be an advocate on social media. “I focus more on the people who are open to supporting and encouraging me. And that, in itself, just makes me want to keep going as far as speaking about HIV, bringing awareness to HIV, because it’s not easy.” 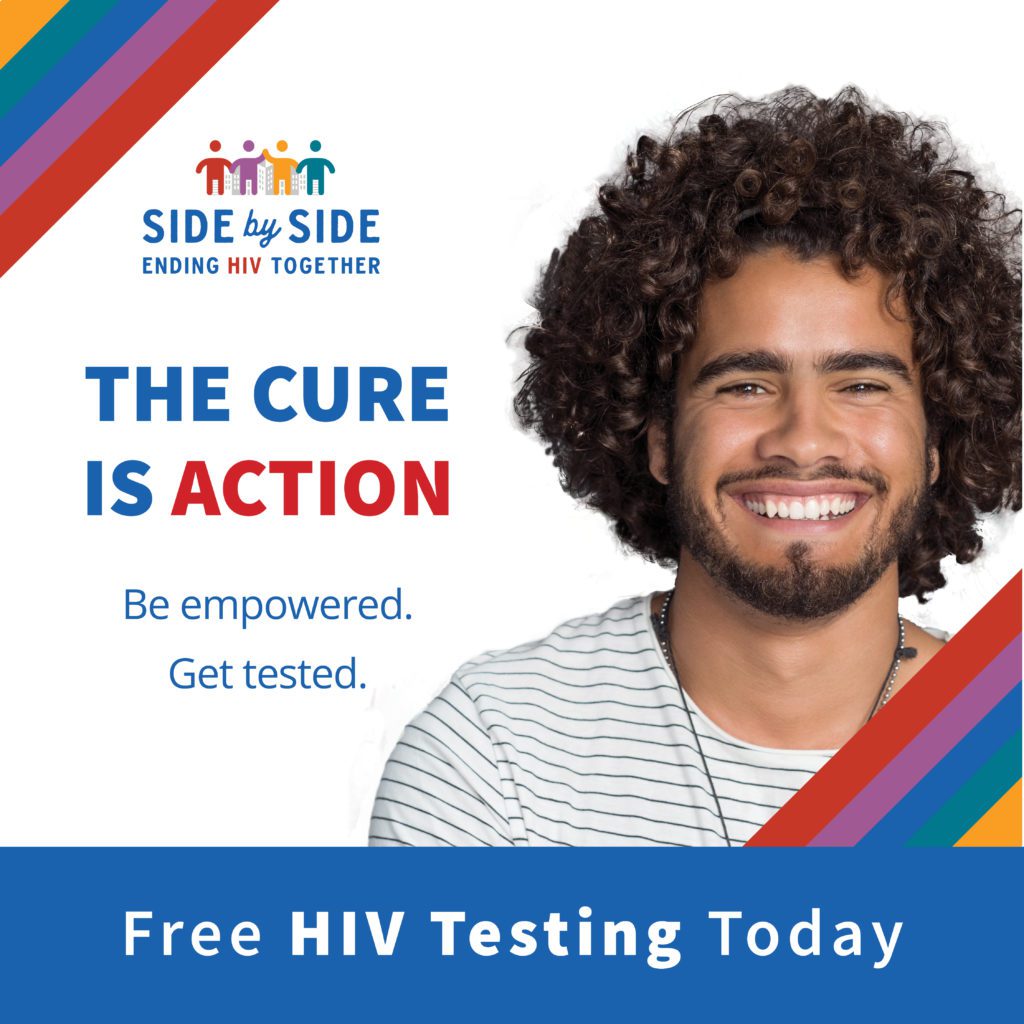 The time has come to treat HIV as if it was like any other virus. Just like every human should be treated with respect and dignity. Unfortunately, marginalized communities, such as people of color and LGBTQIA+ individuals, are disproportionately affected by HIV. Not because of another misconception, misdeeds, or “risky behavior,” but due to a lack of social support, access to healthcare, housing, mental health resources, and other basic needs.

These disparities prevent people from getting tested and treated for the virus, furthering the spread of HIV. It’s time to stop feeding the narrative that people living with HIV are second-class citizens who have somehow earned HIV as a punishment for who they are. Instead, suppose we start testing for HIV as part of our regular health screenings. In that case, there is a better opportunity for treatment and higher quality of life for living with HIV.

Jasmine has accepted that HIV is a part of her, but she will not let it control her. Her access to care and success with treatment has been an uplifting component and given her the strength, mentally and physically, to be a part of the solution. “I want to break the stigma. I want to help. I want to play my part in ending the HIV epidemic.” At this moment, we believe Jasmine has rediscovered who she is: a true friend to people whose minds are trapped in dark places due to their condition. Above all else, Jasmine is a warrior who believes that anything is possible, including ending the stigma surrounding HIV.

Just like Jasmine, your story has the power to touch hearts and change lives. If you are living with HIV in Marion County and want to help fight stigma, contact us today to share your story.

Get more information about living with HIV

A collection of answers and resources

CONTACT US
We’re here to connect you to the information and resources you need.

Do you have questions about HIV? Do you want to know more about testing, connecting to care, or how to show support? Are you interested in learning more about how SIDE BY SIDE can help your community? Fill out this contact form and someone from our team will be happy to help you find answers.